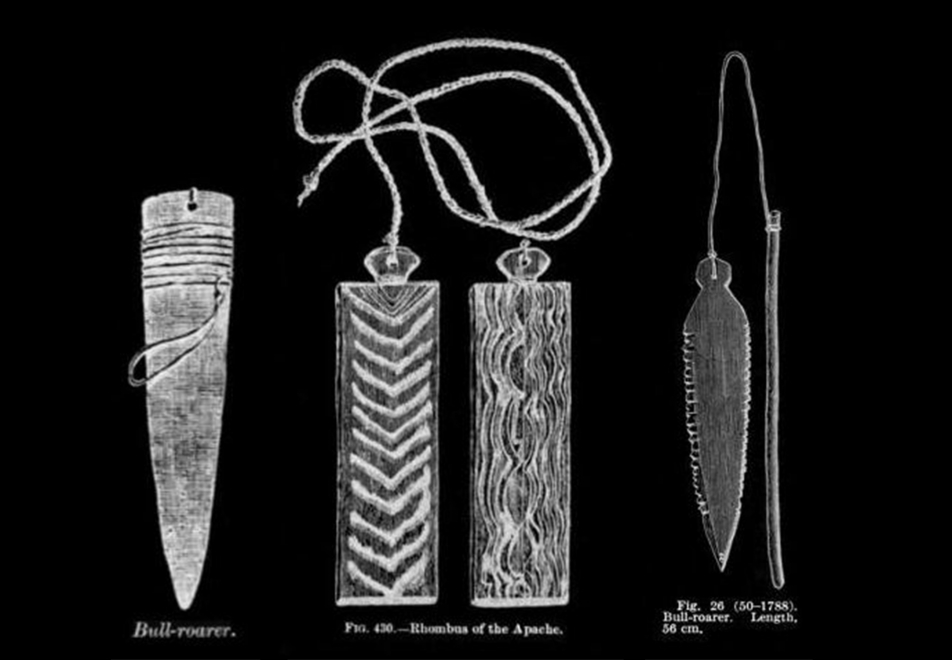 The bullroarer is an ancient musical instrument with shamanic and aboriginal roots. It’s been used all over the world both as a toy and for spiritual purposes. In this informational text, we’ll go over some key aspects of bullroarers such as their history, how to use them, how they work, and how to make one.

The bullroarer is one of the most ancient instruments in the world because it has a history dating back 18.000 years or more. This is known thanks to this being the age of the oldest bullroarer ever found.

For millennia people all over the world have used this instrument.

In Australia, it was a sacred instrument. So much so, that women and un-initiated men who heard the instrument even accidentally could be punished to death.

In North America, it has been used by the Native Americans for shamanic purposes and as a toy. It’s been said to ward off evil spirits with its sound among the Navajos. It has also been used by the Amazonian tribes in South America.

Some are baffled by the fact that this musical instrument has been used for spiritual purposes all over the world. Despite the different groups of people having no contact with each other. And there’s no conclusive answer for this, but a theory that’s been suggested is that humans automatically associate the low-frequency sound made by the bullroarer with a great force.

Bullroarers have many different designs, ranging from a boomerang shape to a perfect rectangle. The one feature they all share is that they’re always longer than they’re wide. They’re often flat, but they don’t have to be! Among Aboriginals in Australia, twisted versions that were bent like propeller blades were used.

Bullroarers can range in size from just 4 inches (10cm) to over 2 feet (61cm) in length, with a width ranging from 1 inch to 2 feet or more! They’re commonly decorated with a drawing or a simple pattern.

How a Bullroarer Works

The bullroarer makes sound due to its fast spinning. But if we want to go a little more in-depth, there’s two important factors responsible for how the Bullroarer makes its sound namely, Autorotation and Vortex Shedding.

Autorotation is the term used to describe how flat plane objects begin to spin automatically when they fall. You can try this yourself by dropping a piece of rectangular cardboard and then watching it spin as it falls.

These vortexes are responsible for the intense sound.

How to Play It

To play a bullroarer, grab the end of its string and start whirling the bullroarer around in a circle. As you do this, you’ll start to hear a roar coming and going. If the bullroarer doesn’t spin or make a sound, try hitting it on the ground as you whirl it, or manually spin it around with your hand.

You can change the sound by adjusting the length of the string and the speed at which you swing.

How to Make a Bullroarer

Follow these simple instructions if you want to make an awesome bullroarer! You don’t need advanced materials, just a slat of wood, a knife, a string, a pen, and some cardboard.

Don’t swing a bullroarer close to anyone else, because if the string breaks it could easily hit someone. Also, make sure the hole isn’t too close to the end of the wood, as that is a weak spot where the string could detach.

The bullroarer itself has always been made from bark, wood, or bone. But nowadays, wood is the choice for almost every bullroarer. And it can be made from any wood! The sound does not depend on the type of wood, as this instrument doesn’t rely on the resonance of the wood for it to work, but rather, on the motion in the air.

The string is traditionally made out of human hair or bark, but today your safest bet would be a nylon string, as it will hold for a long time and won’t break.

Here are some of the common myths surrounding bullroarers and why they are untrue.

Some say that the bullroarer produces infrasonic sounds, and it does. However, it’s often used in a positive context, such as that this would be of benefit.

But this is most likely not the case and infrasonics are not something unique to only bullroarers, certain animals, thunderstorms, and waves. It’s present on many more occasions such as near wind turbines, railroads, and such. And not only that, research has even shown that it can have a range of negative effects, at least in prolonged circumstances.

How Thick Should a Bullroarer be?

The bigger the bullroarer, the thicker it should be. This is for reasons of sturdiness, weight, and lifespan of your bullroarer. A small bullroarer should be at least 1-1,5cm thick in the middle, and a larger bullroarer is often around 2 cm thick.

How Long Should a Bullroarer string be?

Therefore, the recommended length for a bullroarer string is about as tall as you are! That will give you the easiest time getting it off the ground while generating the loudest sound.

What Kind of wood is a Bullroarer made out of?

A Bullroarer can be made from any type of wood. In comparison to other wooden instruments, the bullroarer doesn’t rely on the resonance of the wood, but rather on its spin, weight, and shape.

Can the Bullroarer be used as a communications device?

Some say it’s been used for communication or as a “jungle telephone”, but the evidence for this is slim and I dare you to find anyone going into depth about it. Note, (not referring to spiritual communication)

There are claims of players being able to code sound signals with it but in fact. The sound is pretty monotone and any signals would have to be extremely simple, such as alerting someone of your position with its sound. But coding messages? I believe the claim to be regurgitated and lacking evidence.

It may be heard for long distances, but that is in ideal conditions, such as when there is no wind. It would have been an unreliable communications device.