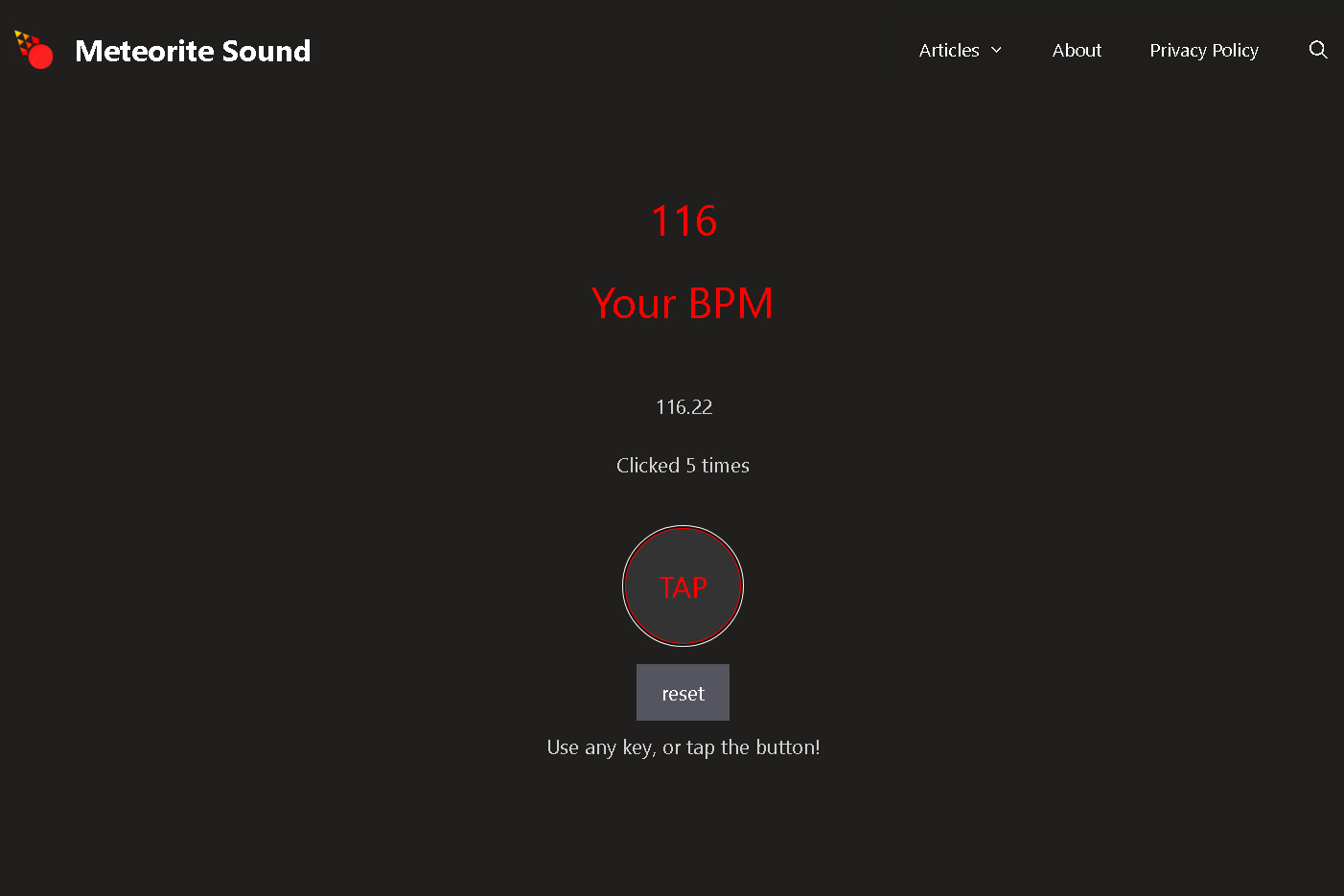 Do you want to find the BPM using an online BPM counter? We’ve compiled a list of the best ones available to help you find the beats per minute of the songs you love.

This is our very own BPM tapper, built by our in-house developers, and it focuses on accuracy and simplicity. It’s mostly made for songwriters, producers, and musicians. But if you want to use it for anything else, you can! Most importantly, it’s resizable, so you can use it on your phone or on your computer. You use it by tapping any key on your keyboard or by touching the buttons.

2. All8 Tap for Beats Per Minute

All8 Tap for Beats Per Minute

This BPM counter is the oldest one of them all! It was created way back in 2000 and was hosted on the site mixed.net, which only existed for a few years as a resource for DJs. In fact, the site that it’s hosted on now, All8 is not the creator of the tool.

Beats per minute online is a website solely dedicated to its tool, which is pretty user-friendly. Though it does have ads, which may scare some users away. A good thing is that it features various settings for you to use, such as the control over how quickly it will auto-reset as well as how many decimals you want on the readout.

Tap tempo is another website dedicated solely to its tool, and this one is our favorite second to our own. It’s so simple and streamlined, and you can touch anywhere, or use any button to activate it. It’s very simple, and it works very well.

Over on the website “get songs BPM” you can find a tempo tap tool, and while the window for the BPM readout is a little too small. At least it works, and it’s kind of cool. If you get a chance, you should check out their website as well, as they have a really heft library of BPM data for songs, which can be useful for so many situations.

Tunepockets tool features one setting, which is when to auto-reset the BPM counter. This is a really useful feature to have, and it should be included in every BPM counter. Overall, it’s a good tool, but unfortunately, there’s an ad up top, which makes it so that the tool is further down on the page, making it harder to use than everybody else’s tools.

What sets Muteds BPM counter apart from the rest of them, is that it shows you genres for the different BPM readouts you get. This tool is ad-free at the time of writing. But its useability is only… okay. You can click or touch with your mouse, but the tool doesn’t register a keyboard as a mode of input. But nonetheless, it’s cool to have the genre detect feature.

This simple little BPM counter is made by the company Chordify, which is a chord identification service for audiofiles. The BPM tapper doesn’t feature any settings whatsoever, and all you get is a readout of the BPM when you click or press on your keyboard. It might be a little too simple for our tastes, but it’s simple and ad-free if that’s to your liking.

What is a BPM Counter?

A BPM counter is a tool used to measure beats per minute, which is a common measurement in music.

Who Uses a BPM Counter?

A BPM counter can be used to measure a wide variety of things, such as the tempo of music or how fast someone is running. The beats per minute measurement is not exclusive to music and the beat can consist of anything, such as a breath, a footstep or a jump.

However, it’s extremely common for music producers to use a BPM counter to figure out what song their project should be in.