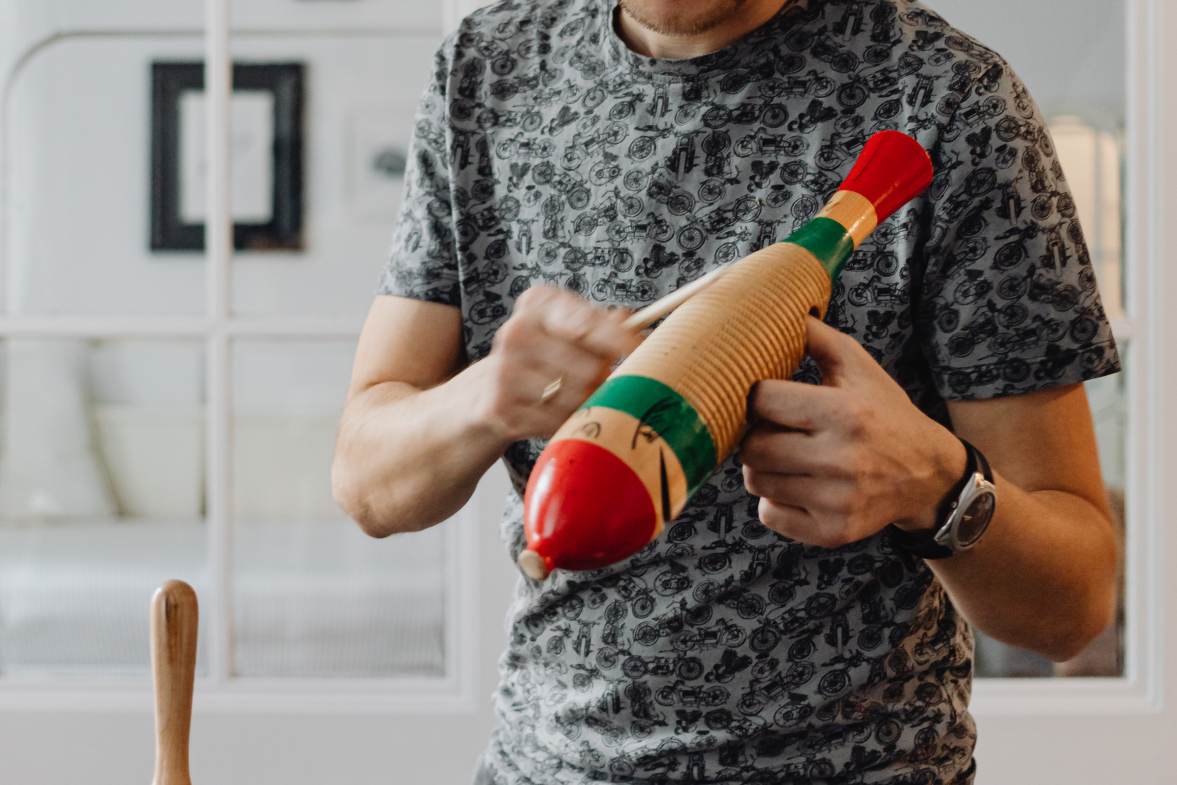 The gourd is a fruit that is used to create a wide range of musical instruments. When it’s hollowed out, it works as a resonating chamber, amplifying any sound that passes through it. Here are some of the most beautiful instruments made from gourds!

The Güiro is a musical instrument used in Latin American and Caribbean music where it functions as a type of scraped idiophone. It makes sound due to the vibration of its body, and it’s traditionally made out of a dried and hollow gourd.

Its skin is carved in circular stripes to create a rugged surface so that when it’s rubbed over with a stick creates a rasping noise. It’s held with finger holes on the back and the rhythm is controlled by scraping up and down.

The Vina is a musical instrument made with gourd, and it uses the hollow fruit body as a resonating chamber to amply the sound of its strings.

It’s reminiscent of the guitar, and it’s in the same chordophone class of instruments. It features 4 melodic strings on its fretboard and 3 auxiliary drone strings on the side which are played with the little finger.

There are many different types of this instrument, and one type called the Saraswati Vina is the national Instrument of India. You can listen to it in the video above. This one, in particular, is made out of a wooden body, with a gourd as an extra resonator on top of its neck.

It’s an ancient instrument that has a history stretching more than 2000 years back. And there’s a legend behind its creation, that tells of a wise man who wanted to mimic the sounds of the forest. He meditated deeply to get answers and then started to create different musical instruments. One of them was the Vina.

Most of the traditional Marimbas use gourd resonators, which you can see in the image above. Wooden bars are placed on top of the gourds, and when they’re struck with a mallet they produce a tone. Every wooden bar produces a different note, and the bigger it is, the lower the note. The smaller it is the higher the note.

It has been used since ancient times in Subsaharan Africa where it is an important instrument used during events such as funerals, weddings, and birthday ceremonies. It found its way over to the Americas via the slave trade where it was popularized and redesigned over time.

In 1850, the Mexican marimbist Manuel Bolán Cruz made several modifications to the original design when he replaced the gourd resonators with wooden boxes and elevated the playing position to a keyboard-style one. This created what is known as the modern Marimba.

The Maraca is a musical instrument traditionally made out of dried gourds or coconut shells. When it’s made, pebbles or seeds are put inside of it so that when it’s shaken, creates a rattling sound. This instrument is often used in Latin American music where it’s commonly played in pairs. Allowing the user to achieve faster rhythms by alternating the rattling between the hands.

One species of gourd that can be used to create maracas is the inedible Coyote melon (Cucurbita Palamta). Which is completely round making it perfect for this purpose.

The Hawaiian nose flute Ipu Hokiokio was a Hawaiian instrument made out of a hollow gourd. It was referred to as a lover’s whistle and was used for entertainment in the evenings.

It was played with the nose, by holding one nostril closed while blowing with the other nostril into a hole on the flute. Melodies were played by covering the remaining holes with their fingers.

Gourds were not only used for making musical instruments in Hawaii. They were also used for carrying food and water, and for storing personal items. They played a cosmological role in the Hawaiian creation story where Papa (Earth Mother) took the gourd’s various parts, threw them up in the sky and they became the moon, the sun, and the stars. And by picking the gourd off the Calabash it became the land and ocean.

The Gopichand is a unique instrument consisting of a gourd drum with a string attached to it that rests between two bamboo laths. It’s used in traditional Indian, Egyptian, Pakistani and Bangladeshi music and is played either like a string instrument or as a drum by tapping on its underside.

When it’s used as a string instrument, the string is plucked and the note is variated by pressing on its bamboo neck, changing the tension of the string.

The Rakatak is a Musical instrument from Ghana, consisting of rings of dried calabash gourd attached to a stick with a 90-degree angle. When the player waves it up and down, the shells smash into each other creating a percussive sound. It’s played in pairs and is used in traditional African music.

There is another version of this instrument that goes by the same name, often sold as a kid’s toy, but it doesn’t look or function the same way.

The Gourd mouth organ is a musical instrument played in South East Asia and this is also where the instrument originates from. It’s made out of a gourd with multiple bamboo pipes attached to it, and the pipes have finger holes like on a flute. The mouth organ is usually played in its polyphonic mode, utilizing many notes at once. And it can also play single notes, by covering every finger hole except for one.

It’s classified as a free-reed instrument because it uses reeds in its pipes made out of either bronze or bamboo. A reed is a thin strip of material that vibrates to produce sound.

Which percussion instruments are made from gourds?

Some percussion instruments made from gourds are the Maracas, Marimba, Gopichand and Rakatak.