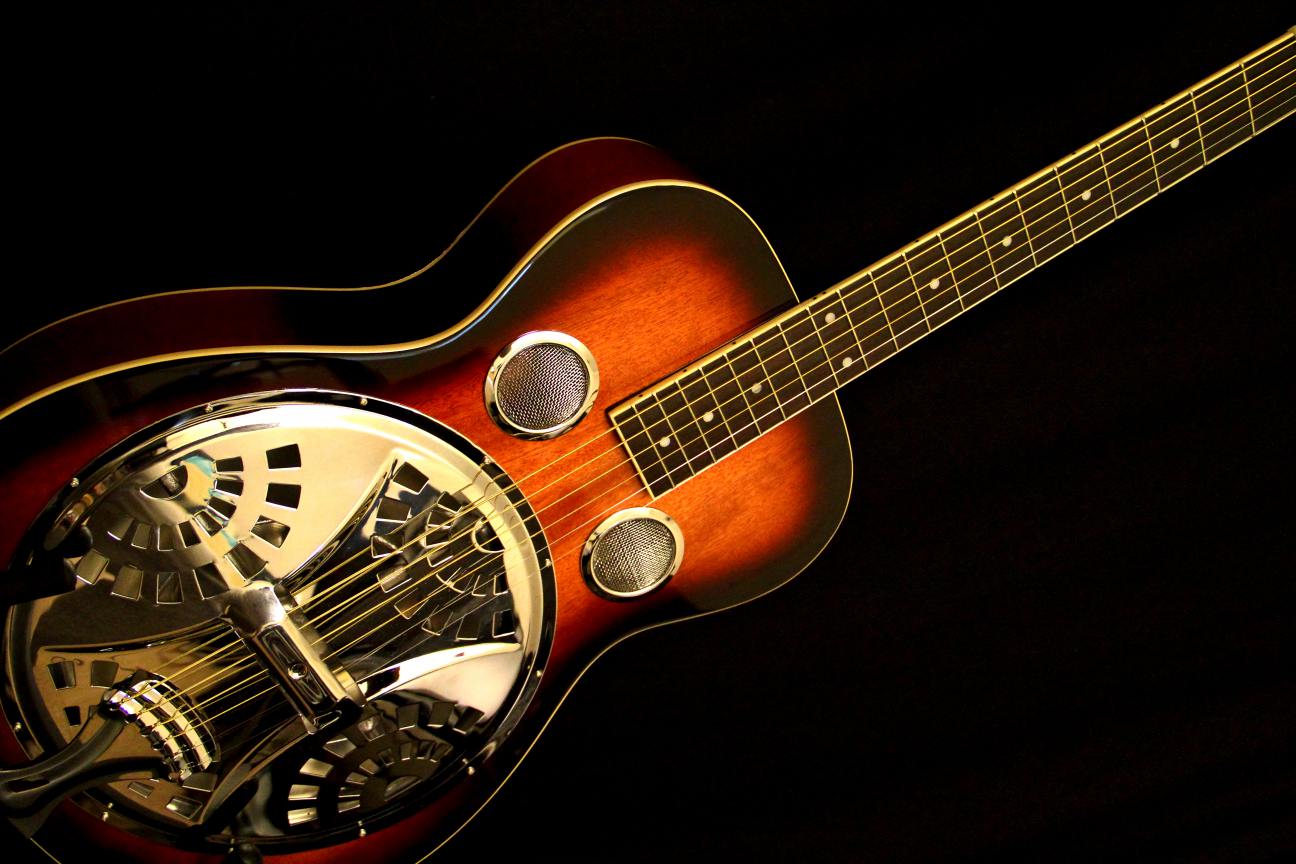 Let’s go on a journey across America and explore the unknown. Some of the most widely used and most popular instruments ever made were invented here. They’ve set the stage for how everybody around the world experiences music today. Here are the American musical instruments you should know about!

The electric guitar is an American musical instrument, invented, popularized, and perfected in America.

It all started in 1932, with what’s known as the Frying Pan also known as the Rickenbacker Model A-22, which was the first commercially successful electric guitar. The name came from its shape, resembling a frying pan. It was a lap steel guitar, but most importantly it featured the revolutionary magnetic pickup for amplifying its sound using electronic signals.

It was a commercial success, and it sold just enough to gather people’s attention about electric guitars. Fast forward to the 1950s, when Fender and Gibson released what was about to set the standard for Electric Guitars. The Gibson Les Paul and Fender Stratocaster. They had a solid body, eliminating any feedback loops from the microphones and they both shared the same design language.

I don’t even need to tell you how successful this instrument became, its original designs echo to this day and you can still buy the original models!

In 1971, On a street in the town of Trumansburg, New York, a man was soldering together what was about to become a worldwide hit. The idea was simple. To transfer the technology from huge modular synthesizers to a much smaller formfactor.

He created, the Minimoog, and it became a huge hit! Bands and artists like Bob Marley, Kraftwerk, and Rush used it in their performances at the time. And the Minimoog caused the Synthpop insurgency of the coming decade after its release.

Looking back at the series of events that followed. It’s safe to say it changed the world of musical instruments completely. As it set the standard for what synthesizers should be in order for the mass market to adopt them, and even in the digital world today we still see its design reflected again and again.

The Minimoog is a totally American musical instrument, and perhaps one of the most groundbreaking ones to ever have been released or invented.

Back in the day, the Autoharp was one of the most popular musical instruments in the United States. But it went into decline and lost favor. In 1929, only six hundred autoharps were made. The manufacturers almost closed down for good, but thanks to a continued interest among the people in the Appalachians, the instrument lived on. One can say that they saved the instrument from going extinct.

It’s an American instrument, invented by Charles F . Zimmerman in 1881, and it was built upon the foundation of Zithers from Europe but adds keys to mute the strings. Because those keys or buttons were considered to be an automatical function, it was named the autoharp.

It’s been closely associated with mountain music and old times. It was always a folk instrument, and it was used in many schools around the U.S. by teachers and students for singing songs in the classrooms. Autoharps were also popular in homes around the U.S. Where its soothing tones would function as entertainment throughout the day, and because of its ease of use, anyone in the family could play it.

In the year 1908, the violinmaker John Dopyera sensed that a war was brewing in Europe, so he fled from his home country of Czechoslovakia to the United States. He opened up a small repair shop in Los Angeles, fixing musicians’ instruments and solving various problems they had.

One day, a skilled guitar player from Texas by the name of Beauchamp walked into his store, asking to improve the loudness of his guitar.

This was a big problem at the time. Because guitars were not loud enough at concerts to play just a melody. Instead, they were constricted to being strummed as a rhythm instrument because they were louder that way.

Beauchamp and Dopyera started working together and attached a horn to an acoustic guitar. The guitar got louder! But Dopyera wasn’t happy with the design, so he continued his work. Years passed and one day in the mid-1920s, Dopyera created the resonator guitar.

Using an aluminum diaphragm to amplify its vibrations, the guitar was much louder than the common acoustic ones. And it also brought with it a unique sound. It’s not thanks to its loudness, but this unique tone and sound that make this type of guitar popular to this day.

It has an elongated soundbox with a raised fretboard running along the instrument, and three or four strings attached. The dulcimer is played by strumming the strings with a stick or quilt with one hand while muting them with the other hand.

While the history of this instrument remains inconclusive. It’s most likely an adaptation of similar northern European instruments such as the Hummel. Which was brought over when European settlers moved into the mountain chain.

The banjo is an instrument synonymous with Country music, and it was created by enslaved Africans and their descendants in the Caribbean and colonial North America. The earliest references of Banjo use in America detail it as an exclusively African-American instrument.

Africans brought with them their musical instruments to America and there the instrument evolved from the earlier banjo-like instruments over in Africa. Over the years, the Banjo also incorporated some European design characteristics, such as the tuning pegs and the style of its carved neck.

The Sousaphone is named after its co-inventor, John Philip Sousa who was an American composer and conductor. He wanted to create a concert musical instrument that sounded better and was easier to play than the tuba. So together with the company J.W. Pepper & Son they developed the Sousaphone in 1903.

It was easier to carry than the tuba, by enveloping the player within it so that its weight gets more centrally distributed. Another difference is the wider boar and throat, and the extra-large bell that you can see on the very top of the instrument. The bell also faces forward which the previous tuba did not.

The instrument accomplished the intended goals by being louder and easier to play. It became an instrument used for Jazz and marching music. But its success didn’t stay in America.

The Sousaphone piqued the interest across the pond, and the British started to import them. But due to high tariffs making them expensive, they decided to start to create their own Sousaphones. This wasn’t replicated overnight, as the Sousaphone is a very delicately crafted instrument that takes a lot of skill to make.

The Didely Bow is an instrument historically played by the imported African Americans inhabiting the Mississippi delta. And it holds a close resemblance to earlier African instruments such as the hunting bow and the Ndidzayimbira Yehova.

It’s made by putting a cigar box or any other box of choice through a stick with one string on it. And it’s played in a very percussive fashion. This American musical instrument isn’t very loud, so the player has to strum the string very hard. And there’s no fretboard or clear indication as to where to play to get a certain note. The player uses a bottle or a guitar slide to change the note.

The scientist, writer, and founding father of the United States, Benjamin Franklin, was also a proficient musician and inventor. When Benjamin Franklin worked as an American diplomat in Paris and London, he got to know the singing glasses which is a musical instrument where you rub your finger over a glass to produce a tone.

When Benjamin Franklin’s friend invented a new set of glasses, more finely tuned than ever. He fell in love with the sound, and it also sparked the idea. How could this instrument get any better?

Benjamin created the glass harmonica. Together with a glass blower in England, Franklin created different-sized bowls for different pitches and inserted them into a metal rod with an old sewing machine as a motor. This genius design worked marvelously and instead of playing only one or two notes at a time, players could now play chords.

The Glass harmonica got a rush of popularity, and its downfall was the rumor that it caused sickness, which people took very seriously. It’s been speculated that this was due to lead poisoning from materials used in the glass, but it doesn’t add up, as it wouldn’t have transferred any more lead than anything else at the time.

The Kazoo is an American musical instrument that made its debut at the Georgia State Fair in 1850 and quickly became a popular instrument. What creates its iconic sound is a plastic membrane, originally a paper membrane, which vibrates when the Kazoo is blown through.

It’s been compared to some toys which have come and gone in popularity such as fidget spinners, the Tamagotchi, and the Slinky. And this is due to it becoming a similar phenomenon in the 1800s. Though by many seen as a toy, it has been used in music by bands such as The Beatles and Red Hot Chili Peppers.

Today, there are two Kazoo manufacturers in the U.S, and one of them is the Kazoo Factory which also has a Kazoo museum over in South Carolina.

You may never have heard of the Calliope, but it was one of the most popular musical instruments in America’s twentieth century. While its roots date back to ancient Roman times, the Calliope was an American invention. And while several thousand were sold, only a few remain today.

At the beginning of the 1870s, Calliopes driven by steam were used as advertising tools by Circuses, to announce their arrival in town. The louder the better, as they wanted to garner all the attention they could get. But their huge size and costly price made them restricted to only the upper tier shows with enough budget.

But at the beginning of the 1900s, things changed. The birth of new Calliopes using compressed or low-pressure air changed the game. Made them lighter, and less expensive. Although the new Calliopes weighed 200-300 pounds, they could be moved by only two men, which was a huge improvement from it’s predecessors.

The Theatre Organ is an American Musical instrument on the brink of extinction. The once popular instrument was installed in countless theaters around the states. But over time, as theaters have gotten demolished, the instrument is now only installed in a few of its original places. They’ve often been saved and moved to private collectors and museums

The Theatre organ worked well for silent films and for theatres, as it could produce a wide variety of sounds. Besides organ pipes, some had chimes, cymbals and marimba, and other instruments all controlled by the organ. It not only played music but doubled as a Sound Effects machine for movies and theatres.

It was popular during the time of 1920 till 1929, but its popularity ended with the great depression that hit America. Many regular organ players despised the Theatre organ as a type of “not serious” instrument. Its wacky quality created the resistance felt by many organ players at the time.

If you wanna check out Native American musical instruments. We got those covered in their own separate list/article right here!