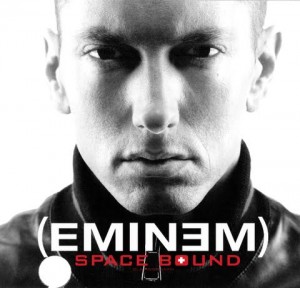 Eminem’s track, space-bound is an odd track in Eminem’s lineup. Because it has such a contrast between the singer’s voice and Eminem’s voice. I’ve analyzed the track down to the detail, and if you want to recreate any of the elements in the song. This will help you do it!

It’s very fun to see a song made by only three people. Most other Eminem songs on the album Recover are made by more. According to me, this helped keep the artistic vision really strong, which really made the track stand out from the rest of the album.

Both Eminem and Steve McEwan’s voice is double and sometimes triple tracked. What this means is that its multiple recordings stacked upon each other, to create a fat vocal effect.

It’s more prominent in the chorus than when Eminem does his bars. During the verses, the double-tracking effect is kind of invisible, but it still creates this great effect. A kind of unhinged sound if you will, that Eminem is known for. He tends to use double tracking in most of his songs.

Obviously, a lot of rappers use doubletracking. But when I started analyzing this track, I realized how Eminem uses it, and how it’s different from a lot of other people out there. While he has just about one or two vocal stems active at any time in the front up and center, (original+adlips), he has a wall of his own vocals behind him, made up of distorted and muffled stems, slightly more stereo widened than his front and center acapella. They got a kind of robotic vibe to them.

This is what makes his rap hit really hard, and it’s present in a lot of Eminem songs (Love the way you lie) is just one out of a bunch of examples.

There’s also distortion in Eminem’s voice. Which activates whenever he get’s “angry” on the track. This is to emphasize the roughness, the emotion if you will.

There are three main drums in Spacebound. There’s a kick drum, a shaker, and a clap. It’s extremely simple.

There’s also a snare mixed in together with the clap. Most likely to add some oomph, but also because the clap is digital and sterile (sounds the same throughout the track) while the snare is more alive, probably a real recorded snare drum with a natural variation.

It’s done to give the snare/clap a variating feel so as to not sound the same all the time.

The same concept is also pretty much applied to the kick.

The kick used has a resemblance to a heartbeat. In my own analysis, I’ve found it out it may actually be a real recorded heartbeat, and not an electronic kickdrum like many may think.

Eminem even raps “I got a hole in my heart” in the lyrics and the song is about love and is very emotional. So it’s a very fitting kick to use.

The kick is played multiple times, two to three, to emphasize the beat. It’s also not just one plain sample. The kick is changing, between two different samples or pitches. One kick represents the In, and the other kick the out. Think of a heart beating, it goes forward, and backward. So the kick is kind of speaking in a way, by alternating between frequencies.

The kick has a distinct notch at 47Hz, to give it a really nice boom. Overall, the bass part of the kick is between 40-170HZ. Sometimes when the kick is played, a “ghost kick” is played before it. It’s a version of the kick without bass. But it makes you anticipate the real kick in a cool way.

I got the drum stem using Spleeter, therefore the grey/black part in the sonogram above may just have accidentally been cut out.

The song starts with only a clap and a snare-drum playing at the same time. But the snare drum in the mix, changes character throughout the song, from a more dull snare to a snare higher in tone. The clap is a very open and drum machine-style clap with a lot of white noise and a high release.

The snare and clap are treated with reverb with about 1-second decay.

The shaker is what gives Spacebound its drum flow. It’s really responsible for driving the track forward.

It consists of an egg shaker or small maracas played by hand, to give the track a natural feeling. Whoever is playing the shaker is accentuating the rhythm to fit with what’s happening in the track.

There’s a steel guitar, which really gives Spacebound its sound. It’s played by McEwan who also sings in the chorus.

There are two guitar tracks in the mix, the picking, and the chords. The chord guitar, in this case, is very far back in the mix, and you might not even notice it.

Then there is this guitar picking, that plays notes from the same chord the other guitar plays. This guitar is treated with an exciter, compressor, and some good old EQ. The exciter is the main effect.

The bass is very anonymous in the mix. It’s just holding one note which changes accordingly to the chord being played at any moment.

It’s hard to pinpoint exactly what synth was used to create the bass. But it’s softly cut off with a lowpass filter at about 450Hz in the verses, and then this lowpass filter is lifted off during the chorus to accentuate the bass, and the bass consists of multiple voices played by the synth to create an interesting interference/slight dissonance. It’s a very “ooh” sounding base.

There’s also a connection with the drums, not only EQ ducking but also a morphing effect that seems to either be manually or automatically triggered by the drums during the chorus.

There’s a synth sounding like a submarine sonar ping, as well as another synth which Jim Jonsin refers to as earcandy. Consisting of a little bit of creative freedom with a few bells beautifully tucked in at a few places.

The submarine sonar synth is crucial for the song, as it sets the theme for the whole thing. It’s a reference to outer space, which of course, also is a theme of the song.

This is the best tutorial for getting the Submarine sound. It’s in German, and I don’t understand that language, but at least it’s easy to replicate the settings. I put the timestamp at 4:54, so you can hear the sound.

Overall, the production isn’t trying to be fancy. It’s a very balanced track with a simple chord format that is easy to take in. Think of everything as a loop, same chords, same kick, everything all over. With a touch of progression.

The thing that makes this very looped beat work is the fact that the sound gets unleashed in the chorus and then it goes back to being mellow again. More importantly, thanks to the contrast between Eminem and the Chorus singer, the attention span is kept.